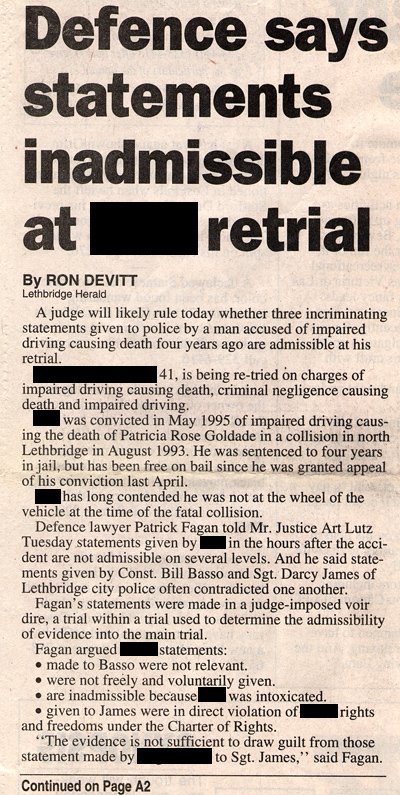 A judge will likely rule today whether three incriminating statements given to police by a man accused of impaired driving causing death four years ago are admissible at his retrial.

The accused was convicted in May 1995 of impaired driving causing the death of the victim in a collision in north Lethbridge in August 1993. He was sentenced to four years in jail, but has been free on bail since he was granted appeal of his conviction last April.

The accused has long contended he was not at the wheel of the vehicle at the time of the fatal collision.

Defence lawyer Patrick Fagan told Mr. Justice Art Lutz Tuesday statements given by the accused in the hours after the accident are not admissible on several levels. And he said statements given by Const. Bill Basso and Sgt. Darcy James of Lethbridge city police often contradicted one another.

Fagan’s statements were made in a judge-imposed voir dire, a trial within a trial used to determine the admissibility of evidence into the main trial.

* ade to Basso were not relevant.
* were not freely and voluntarily given.
* are inadmissible because the accused was intoxicated.
* given to James were in direct violation of the accused’s rights and freedoms under the Charter of Rights.

“The evidence is not sufficient to draw guilt from those statement made by the accused to Sgt. James,” said Fagan.

The victim’s father, of Coaldale, said the accused’s admissions are key to the success of the Crown’s case to re-convict the accused.

James, a constable when the accused, 28 and pregnant, was killed, testified most of the morning, poring over her notes and original statement.

Fagan used James’ original testimony from the 1995 trial to try to find contradictions.

James said she went to LRH to see the accused regarding outstanding warrants from Fort Macleod and to determine the identity of the third person in the vehicle.

“Who was the girl in the truck?” James said she asked the accused.

“It was my cousin. I was giving her a ride home,” she testified the accused replied. Fagan urged the accused’s statement is not admissible because he had not been read his rights.

James said she could not determine the degree of the accused’s intoxication, but blood-alcohol tests taken three times in the hours after the incident indicated the accused was well over the legal limit.

The second incriminating statement came when the officer and the accused were driving back to the police station and they were talking about his problem with alcohol.

James said the accused indicated he was driving carefully and the other person was speeding when the collision occurred.

After hearing what James believed to be an admission of guilt, she reminded the accused again of the contents of a police caution she had read earlier in the morning, outlining that anything he said might be used as evidence against him.

Fagan argued the accused’s statement ensued from interrogation tactics used by James while the accused was handcuffed in the back seat of the traveling car.

Crown attorney Bob Coleman stressed that James did not do anything further until she got back to the station, other than remind him of his police caution.

“She wasn’t interrogating him at all. It was a discussion basically about his drinking,” said Coleman. “Basically she knew at the time of his statement or utterance that she should do something.

“The conversation was not prompted or solicited in any way by her.” James said she arrived at the station and put the accused in a holding room and based on his comments in the car began to read him his rights, to which the accused blurted out what is considered his third incriminating statement: “Why would I get charged. He hit me. I was driving down the road and he hit me. I don’t want to be charged until I call a lawyer,” the accused is alleged to have said.

It was then James made the official arrest.