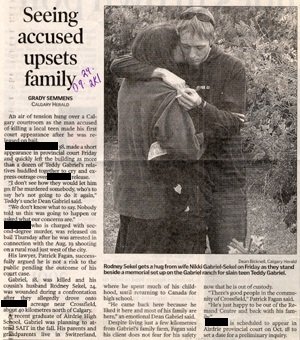 An air of tension hung over a Calgary courtroom as the man accused of killing a local teen made his first court appearance after he was released on bail.

The accused, 38, made a short appearance in provincial court Friday and quickly left the building as more than a dozen of TG’s relatives huddled together to cry and express outrage over the accused’s release.

“I don’t see how they would let him go. If he murdered somebody, who’s to say he’s not going to do it again,” TG’s uncle DG said.

“We don’t know what to say. Nobody told us this was going to happen or asked what our concerns are.”

The accused, who is charged with second-degree murder, was released on bail Thursday after he was arrested in connection with the Aug. 19 shooting on a rural road just west of the city.

His lawyer, Patrick Fagan, successfully argued he is not a risk to the public pending the outcome of his court case.

Gabriel, 18, was killed and his cousin’s husband RS, 24, was wounded during a confrontation after they allegedly drove onto the accused’s acreage near Crossfield, about 40 kilometres north of Calgary.

A recent graduate of Airdrie High School, Gabriel was planning to attend SAIT in the fall. His parents and grandparents live in Switzerland, where he spent much of his childhood, until returning to Canada for high school.

“He came back here because he liked it here and most of his family are here,” an emotional DG said.

Despite living just a few kilometres from TG’s family farm, Fagan said his client does not fear for his safety now that he is out of custody.

“He’s just happy to be out of the Remand Centre and back with his family.”

The accused is scheduled to appear in Airdrie provincial court on Oct. 18 to set a date for a preliminary inquiry.

“Client discharged Patrick Fagan as his legal counsel prior to commencement of Preliminary Inquiry in favour of alternate legal counsel. The accused was ultimately convicted of manslaughter at trial and sentenced to a lengthy term of imprisonment in a federal institution.”