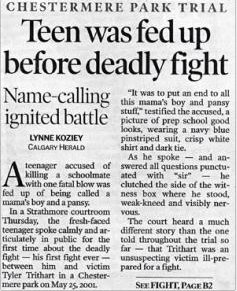 A teenager accused of killing a schoolmate with one fatal blow was fed up of being called a mama’s boy and a pansy.

In a Strathmore courtroom Thursday, the fresh-faced teenager spoke calmly and articulately in public for the first time about the deadly fight — his first fight ever — between him and victim Tyler Trithart in a Chestermere park on May 25, 2001.

“It was to put an end to all this mama’s boy and pansy stuff,” testified the accused, a picture of prep school good looks, wearing a navy blue pinstriped suit, crisp white shirt and dark tie.

As he spoke — and answered all questions punctuated with “sir” — he clutched the side of the witness box where he stood, weak-kneed and visibly nervous.

The court heard a much different story than the one told throughout the trial so far — that Trithart was an unsuspecting victim ill-prepared for a fight.

The first witness, a 17-year-old girl, said she ran into a pumped-up Trithart the day of the fight.

“He said he was going to grab (the accused’s) hair and smash his face into his knee and kick his butt,” she said.

The accused and the witness cannot be named under the Young Offenders Act.

What hasn’t changed throughout the trial is the fact the fight was inadvertently prompted by the accused’s unsuspecting girlfriend — a beautiful, slight girl with long, dark hair — who had been dating the accused for six months before Trithart reportedly started making advances.

“(Trithart) didn’t like the fact that I was going out with her,” the accused told the court Thursday.

Rumours, said to have been started by Trithart, circulated throughout the school that the accused was a “mama’s boy” and “pansy” who would never fight.

Questions were tossed around about Trithart’s feelings for the accused’s girlfriend.

The rumours continued and conditions got tenser, until one day, Trithart passed the accused in the school hallway and told him he could keep his girlfriend — a healthy dose of profanity and insults directed at the girl thrown in.

The next day, Trithart showed up outside the accused’s shop class and asked him if he wanted to “go” after school. The accused agreed to fight, not so much to protect his girlfriend’s honour but out of exasperation, he told the court.

“It was to put an end to all this momma’s boy and pansy stuff,” he said of the motivation to fight.

The accused arrived at the park, a well-known gathering place, with his friends and changed out of the sweater his mother had given him into a T-shirt that was handed to him.

“I didn’t want to rip the sweater or get blood on it from a bloody nose,” he told the court Thursday.

Then Trithart — taller than the five foot eight, 160-pound accused — arrived and the two walked straight towards each other, the teenager testified.

“I never even slowed down. As soon as we were close enough . . . my hand came up and his hands came up, too. I punched right between his hands. We were there to fight, I didn’t want to get hit first.

“When I hit him, he just fell over, which I had no expectation of. Then I leaned down and gave him three little shots.”

Propelled by nervous energy, the accused said he was hoping, at best, to give Trithart a “bloody nose or fat lip or black eye.

The accused then got up and walked back to his car. Over his shoulder, he yelled to Trithart that if he wanted to fight again, just let him know. He had no idea the other boy was minutes from death.

“I thought he’d just get up and walk back to his truck.”

When the accused drove away, his girlfriend by his side, he told her he couldn’t believe he had won the fight.

He went home and helped his father build some stairs.

The memory of that simple act of innocence brought tears to his eyes as he stood on the stand. The accused lifted his wire-rimmed glasses and wiped the tears away, while those seated in the courtroom did the same.

Later that day, May 25, the accused was told first that Trithart had been taken to hospital, then that he had died.

“I didn’t believe it. I thought it was a rumour. You don’t think something like that will happen.”

The trial is expected to end today.