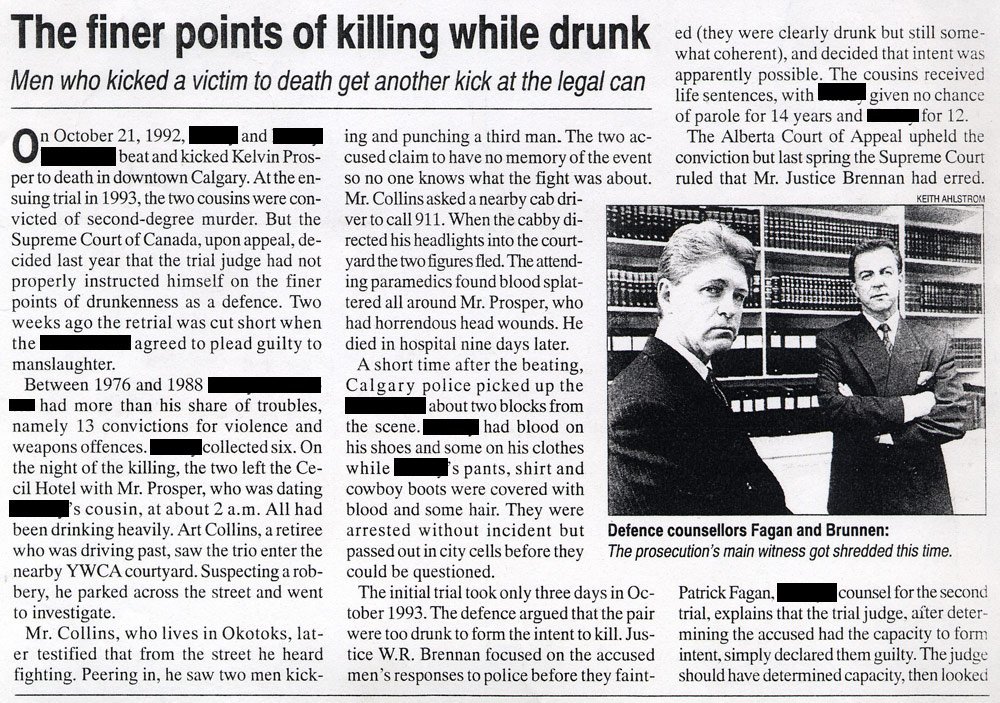 On October 21, 1992, the accused beat and kicked the victim to death in downtown Calgary. At the ensuing trial in 1993, the two cousins were convicted of second-degree murder. But the Supreme Court of Canada, upon appeal, decided last year that the trial judge had not properly instructed himself on the finer points of drunkenness as a defence. Two weeks ago the retrial was cut short when the accused agreed to plead guilty to manslaughter.

Between 1976 and 1988 one of the accused had more than his share of troubles, namely 13 convictions for violence and weapons offences. The other accused collected six. On the night of the killing, the two left the Cecil Hotel with the victim, who was dating the accused cousin, at about 2 a.m. All had been drinking heavily. A bystander, a retiree who was driving past, saw the trio enter the nearby YWCA courtyard. Suspecting a robbery, he parked across the street and went to investigate.

The bystander, who lives in Okotoks, later testified that from the street he heard fighting. Peering in, he saw two men kicking and punching a third man. The two accused claim to have no memory of the event so no one knows what the fight was about.

The bystander asked a nearby cab driver to call 911. When the cabby directed his headlights into the courtyard the two figures fled. The attending paramedics found blood splattered all around the victim, who had horrendous head wounds. He died in hospital nine days later.

A short time after the beating, Calgary police picked up the accused about two blocks from the scene. One of the accused had blood on his shoes and some on his clothes while the other’s pants, shirt and cowboy boots were covered with blood and some hair. They were arrested without incident but passed out in city cells before they could be questioned.

The initial trial took only three days in October 1993. The defence argued that the pair were too drunk to form the intent to kill. Justice W.R. Brennan focused on the accused men’s responses to police before they fainted (they were clearly drunk but still somewhat coherent), and decided that intent was apparently possible. The cousins received life sentences, with the accused given no chance of parole for 14 years and the accomplice for 12.

The Alberta Court of Appeal upheld the conviction but last spring the Supreme Court ruled that Mr. Justice Brennan had erred.

Patrick Fagan, the accused counsel for the second trial, explains that the trial judge, after determining the accused had the capacity to form intent, simply declared them guilty. The judge should have determined capacity, then looked…